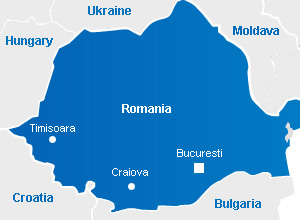 The largest Balkan republic, a country located at the crossroads of Central, Eastern, and Southeastern Europe

Romania has long benefited from rapid convergence towards the EU average per capita income and its economic performance was remarkable. After the financial crisis, Romania endured an economic slowdown, especially in the automotive sector, which is subject to foreign demand. Financial difficulties pushed Romania to seek financial help from the IMF, the European Commission, and the World Bank. More recently, the Romanian economy was one of the fastest-growing economies in the EU (exceeding 4% of annual growth). A drop caused by the Covid pandemic was followed by a marked economic growth in 2021. However, the country has yet to deal with high inflation. The current inflation rate is in double digits. This is mainly due to the growing demand combined with the unstable situation in Ukraine, which is leading to a sharp rise in energy prices. The Debt-to-GDP ratio remained declined in the last years despite higher government spending as a result of growing GDP.

An aging population, emigration of skilled labor, significant tax evasion, insufficient health care, and an aggressive loosening of the fiscal package compromise Romania’s long-term growth and economic stability and are the economy’s top vulnerabilities. With 33% of the population at risk of poverty, Romania remains one of the poorest countries in Europe. Unemployment has been decreasing in the last years. However, the country’s informal economy and employment remain significant, and the participation rate for Hungarian and Romani minorities, young people, and women in the economy is low.

Source: Romanian Statistical Yearbook, Romanian Institute of Statistics, IMF, Eurostat, 2017-2018
*As of 2018, the social insurance contributions that were previously the employer’s obligation were transferred to the employee’s responsibility and are fully paid by the employee, which is reflected in the enhanced gross amount of the earning.

The key sectors of the Romanian economy are agriculture, automotive, ICT, oil & gas, pharma, electronics, shipbuilding, metalworking, telecom, and energy. Main FDI sectors include wood processing, optics and electronics industry, energy, trade, financial services and construction. Among service industries, Romania has exceptional strengths in IT. Some refer to Romania as the “Silicon Valley” of Eastern Europe as it boasts the highest number of IT specialists in Europe and 6th worldwide.

Agriculture represents around 4.3% of Romania's GDP and employs 21.2% of the country's active population. The main resources and agricultural production in Romania are cereals, sugar beets and potatoes. However, production remains very low in comparison with the country's potential capacity (more than 58% of the land is agricultural). About 25% of the country is covered by forest (especially around Transylvania), and the logging industry is developing very fast. Romania has limited energy dependence (23%) thanks to coal, oil, gas and uranium, but also hydro- and wind power.

The Romanian automotive industry has experienced rapid expansion in the last few years as several of the world’s leading car manufacturers have opened new production facilities in the country. Thus, the sector is now dominated by foreign investors with an ever-growing concentration of car manufacturers and spare parts suppliers. Foreign companies are attracted by the cheap, yet relatively experienced and educated labour force as well as open access to other EU markets. The automotive industry employs approximately 120,000 and it represents over 15% of Romanian GDP and over 27% of exports. Car parts producers and service providers generate over 70% of the automotive industry turnover. Ford has taken over one of Daewoo’s production plants in Craiova, another car manufacturer is Automobile Dacia SA owned by Renault Group. As a result, an increasing number of suppliers of spare parts are opening facilities in Romania. An impressive count of 13 out of 15 global Tier 1 car suppliers run production activities in Romania.

Romania has considerable oil and gas reserves and also a highly developed refining industry. The average oil production reaches 70,000 barrels a day and there are 600 million barrels in crude oil reserves. Natural gas resources are estimated at 3.6 trillion cubic feet; however, imports are still a necessity in order to cover the domestic consumption requirements. The vast majority of oil and gas companies are heavily involved in climate change reduction investments. Romania has a large potential for LNG developments in the Black Sea. Romania’s natural gas producer RomGaz has planned to build the first LNG terminal in the Black Sea at Constanta port. The project was approved by the EC and is on track to be implemented by 2026. Romania is a key holder of coal, gold, copper, silver and uranium reserves. The country has committed to phase out coal by 2032.

Romania's economy is mainly centred on the services sector, which represents 57% of the GDP and employs nearly 48% of the nation's workforce. Tourism, in particular, is booming with almost 13 million tourists in 2019. The technology sector has also seen immense growth in recent years, due to the emergence of a high-qualified workforce whose cost is lower than the European average. Romania's ITC sector contributes approximately 6.2% of GDP and is expected to increase to 12% of the GDP by 2025. At the moment, this sector employs ca. 113 thousand people, which is expected to increase to 230-250 thousand by 2025. It is one of the leading countries in the region not only for IT&C development but also for SSC & BPO.