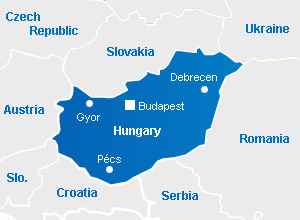 A landlocked country with a large number of spa towns and hot springs
Home to Lake Balaton, the largest lake in Central Europe, Rubik’s cube and ballpoint pen.

Hungary, comparable in population and size to the Czech Republic, is one of the least regulated economies in the CEE region and one of the most attractive FDI destinations in Europe, with the lowest corporate taxes and highest VAT rates in the EU. The country suffered severe consequences of the global economic crisis partly caused by the unreasonable fiscal policy of the previous government with large current and fiscal account deficits, and an over-indebted private sector. A set of unorthodox economic policies known as „Orbanomics“ coupled with high inflows of FDIs and EU funds helped Hungary got back on the growing curve and the country has experienced strong growth for several years. GDP growth, which belonged in 2018 and 2019 to one of the strongest within the EU, was largely supported by the surge in the disbursement of EU funds and rising disposable income. The strong growth contributed to the lowest unemployment rate in thirty years. After a sharp drop of 4.5% in 2020, the Hungarian economy got back on track the following year, growing by 7.1%. Growth is mainly driven by domestic demand. Inflation remains elevated due to the increasing food and energy prices.

The agricultural sector, which has been the dominant force in the country’s economy for many years, now represents 3.6% of GDP and employs approximately 5% of the working population today. Cereals, fruits, vegetables, and wine are the main crops.

Industry accounts for 25.4% of the country’s GDP and employs around 31% of the working population and is very open to foreign investment (manufacturing almost consistently ranks as the top receiver of foreign direct investment). The automotive and electronics sectors are the two main industrial sectors, representing 30% of exports and 15% of GDP.

The services sector contributes 55.5% of GDP and employs almost 64% of the labour force.

Automotive is a backbone of the Hungarian industry, directly employing 13% of the workforce in the manufacturing sector. Most production is destined to export, accounting for 21% of all exports. The country is home to four car companies (Audi, Mercedes, Suzuki, and Opel) that manufacture more than 400,000 passenger cars a year.

This most productive sector in Central Europe accounts for 5.3% of GDP and employs over 110,000 people. Many of the world’s largest EMS companies have established their plants in Hungary. The country maintains a leading position in the manufacture of finished products.

The Hungarian ICT sector is a well-established and developed industry. The total ICT market in Hungary accounts for around 10% of the country’s GDP and employs 400,000 workers. The market is expected to grow further, under the influence of the private sector. Fierce competition has led to price and profit decrease in the hardware market.

The Hungarian food industry plays an important role in Hungary’s economy, with a total estimated value of almost EUR 9 billion. It represents around 14% of the total processing industries, buying 75% of the local agricultural produce, which accounts for 8.3% of Hungary’s total exports. The sector accounts for 5% of the GDP and employs 5% of the active population.

Conditions in Hungary are conducive to the consolidation of the biotechnology industry (world-class primary research results, highly qualified researchers, outstanding traditions of the pharmaceutical industry, and strength in related industries). The leading Hungarian biotechnology companies target mainly export markets (the EU, USA, Japan). The country is the largest exporter of medicinal and pharmaceutical products in the region. The Life science sector accounts for 40% of Hungarian R&D spending and directly employs 14,000 people.

Hungary is one of the most open economies to international trade in Europe, in fact, Hungary’ s exports/GDP ratio at around 81.3% is the eight highest in the EU. The country exports mainly to Germany, Italy and neighbouring countries.