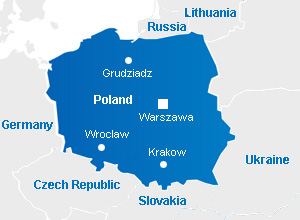 The 9th largest country in Europe in terms of size; a nation with a proud cultural heritage

Poland stands out as one of the most successful and open transition economies in the CEE region. Privatization of small and medium-size firms in the early 1990s and liberal law on establishing new firms led to rapid development of a private sector, now accounting for 70% of all economic activity.

Poland has been enjoying the longest period of uninterrupted GDP growth in Europe. Its GDP kept growing even during the financial crisis when the rest of the EU economy was contracting. Poland was the least hit by the global financial crisis, thanks to its large domestic market as well as well-capitalized and sound financial sector, relatively low degree of openness of the economy, and sizeable depreciation of the Polish currency at an early stage of the economic turmoil and also skillfully managing public finances and adopting controversial pension and tax reforms to further bolster public finances.

The country performed well during the last decade with the real GDP growth rate generally exceeding 3-4%, with private consumption (fuelled by favourable labour market developments and strong consumer confidence) as the main growth driver, together with public investments financed with EU funds. In 2020, when the recession triggered by the Covid pandemic hit, Poland recorded one of the shallowest GDP declines in the EU: The economy declined by only 2.7% (compared to an almost 9% drop in Italy, and nearly 8% in France). In the following year, the Polish economy got back on track growing by 5.9%. The country’s high competitiveness, market resilience, economic diversification, and good fiscal policy should ensure growth in the forthcoming years.

The structure of the Polish economy has changed dramatically over the last 30 years. The service sector has gained in importance, and the significance of industry diminished. The changes resulted from a dynamic development of the service sector and profound restructuring of ineffective national industrial companies in Poland in the 1990s. This process was accompanied by the development of modern industrial sectors, which was feasible mainly thanks to a strong inflow of foreign investment. The leading sectors in Poland are the food & beverage industry, Automotive, Chemicals and Pharmaceuticals, Electronics, ICT, Mechanical engineering, and furniture.

Defense expenditures reached 2.2% of GDP in 2020. In 2022, the parliament unanimously passed the “Homeland Defence Act”, which will increase the defense spending to 3% of GDP in 2023– one of the highest levels in NATO. The drone market (military and commercial) value is expected to skyrocket to over EUR 750 million in the next 10 years (the market’s value is currently estimated at EUR 32 million).

According to the report Energy Policy of Poland until 2040, the country plans to reduce its dependence on coal for electricity generation to 56% by 2030, thus limiting the environmental impact of the energy sector. Clean energy production should be boosted by the construction of Poland’s first nuclear plant. In addition, some private companies, such as Synthos or KGHM, plan to install small modular reactors on their industrial sites.

Poland is the largest importer of chemicals in the CEE but also a large exporter. Its rising demand for chemicals is fostered by growth in the machine, automotive, electrical, electronic, paper industries, and agriculture. The dominant sectors of the industry are the petrochemical, plastics and fertilizers, and chemicals used in the construction sector. The pharmaceutical industry is gaining a stronger position within the sector and leads the CEE region in terms of R&D expenditures.

Poland is a significant European producer of a diverse range of agricultural products. The country is the EU’s largest producer of poultry and apples, the second-largest grower of potatoes (after Germany), and ranks third in sugar beets, rapeseed, and pork. Based on strong agriculture, the highly competitive food & beverage sector accounts for 20% of Poland’s manufacturing output. For fast-moving consumer goods producers, Poland is the manufacturing hub for the wider EU and even EMEA (Europe, Middle East, and Africa) markets.

Strong manufacturing industry 20-25% of the GDP. The automotive industry itself accounts for 8% of the GDP and generates 13% of Polish exports. The electromobility sector plays a key role in the innovation of the Polish economy. Poland is home to one of the world’s largest electric vehicle battery production plants, which is operated in the Silesian region by LG Chem Group. State-owned company ElectroMobility Poland (EMP) is preparing to launch Poland’s first national electric car, the Izera, its production is expected to start by 2024. Poland is in the very beginning of development leading to the industry 4.0 era. Only 6.0% of manufacturers claim that they have already begun the transformation process. Some 65% of the industry is still at the 3.0 automation stage, with only 15% fully automated and 76% with not completed the automation process. Industries of interest include the automotive, furniture, pharmaceutical, chemical, electronics, aviation, metal & machinery, and food processing sectors.

IoT, blockchain, an active network of start-ups community, and several success stories on the international level (Booksy, Brand24, LiveChat, Brainly, Wish) are Poland’s main assets. The IT industry accounts for 8% of Poland’s GDP. There are more than 1,300 shared service centers (70% of all centers located in CEE) employing 300,000 people. Poland has also become a cloud hub of Central and Eastern Europe, with Google as the first to launch a new cloud data hub in Warsaw in 2021, shortly followed by Microsoft’s new data center and Gaia-X cloud system (an EU-supported technology project to act as a European counterbalance to global cloud platforms).

• Poland will build a central airport for as much as 35 billion zlotych (EUR 8 billion) by 2027.
• The Polish government, with the aid of the European Union, plans to invest over USD 30 billion in the seaports and inland waterways by 2030.
• In May 2018, a consortium of several entities was commissioned to prepare the Central Port development concept in Gdansk. The investment of the Central Port, with a planned area of about 500 ha, with a target number of up to 8 terminals, will allow the Port of Gdansk to handle up to 100 million tons of cargo annually.
• PLN 107 billion (ca. EUR 25 billion) is earmarked for the construction of new expressways and highways in the coming years. By 2023, nearly 4,000 km of new roads should be finished.

Poland is less open to international trade due to its large domestic market which in turn reduces the risk of external shocks. The EU market accounts for 74.8% of the country’s export, while 65.9% of imports come from the EU.