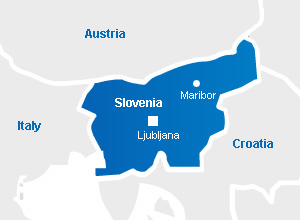 The most developed country of the former Eastern Bloc

It was considered a star performer after attaining independence in 1991: it registered dramatic gains in per capita and aggregate wealth, established a stable and well-functioning democracy and raised the standard of living for Slovenians to a level on par with Western European economies. Belying its size, Slovenia has used its savvy, determination, and unique geography to its advantage, becoming a strong regional and international player.

As a member of the European Union since May 2004 and of the Eurozone since 2007, Slovenia is an advanced, independent, and stable country with the highest per capita GDPs in Central and Eastern Europe (ranking 1st, followed by the Czech Republic, Lithuania, and Estonia). Its economic growth regularly exceeded 3% for several consecutive years until the Covid pandemic in 2020, when the economy contracted by 4.2%. The Covid-19 pandemic had a particular impact on the tourism sector, which accounts for 12% of the country’s GDP and more than 40% of its services exports. Slovenia is expected to experience significant economic growth, especially in manufacturing and construction.

The level of foreign direct investment (FDI) per capita in Slovenia is one of the lowest in the EU, and the labour productivity and the competitiveness of the Slovenian economy are still significantly below the EU average. Taxes are relatively high, the labour market is seen by business interests as being inflexible, and industries are losing sales to China, India, and elsewhere.

Slovenia has a skilled and productive labour force of almost 1.2 million people out of its 2.08 million population. The agricultural sector is economically less important contributing only 2.1% of GDP, although it employs around 4% of the population. The total utilized agricultural area equates to 24% of the total area of the country, and around 9% is dedicated to organic production. Food and beverage production is mostly based on small-scale farming. Forestry is a key economic factor, with 58.2% of land area forested as 58.2%, benefiting the wood and furniture industries.

The industrial sector represents 27.8% of the GDP and 34% of employment. Key industries are mechanical industries (automotive, metal processing, and machinery) and the high value-added industries (electronics, pharmacy, and chemicals) with a strong focus on R&D. The automotive industry contributes 10% to the country’s GPD and its share of exports reaches 20%. The country has pioneered the manufacture of the first serially produced electric airplane with an EASA certification.

The services remain the most significant sector in the Slovenian economy. This sector, which represents 64% of the GDP and employs 62% of the total workforce, has shown a strong growth pattern during the last ten years, especially in the fields of information and communications technology (ITC), financial and commercial services, and retail business. The tourism sector is very dynamic and is undergoing a period of strong development, helped by the Strategy for Sustainable Development of Slovenian Tourism for 2017-2021.

Slovenia is exceptionally open to international trade – its export/GDP ratio at 83.5% (2021) is one of the highest in Europe.

Approximately 70% of total imports and exports are EU-related. During the pandemic, the international trade with non-EU countries has risen, especially in terms of medical supplies and pharmaceuticals.

The key import commodities include motor vehicles, chemicals, fuels and lubricants, and food. Machinery and transport equipment are the leading exports category followed by chemicals and food.