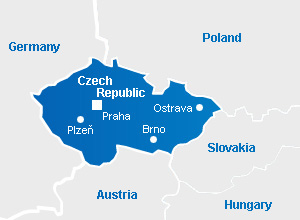 A proud nation with a good sense of humour, highly educated labour force, and track record of invention (from propeller to contact lenses) and high quality products (cars, beer, glass)

The Czech Republic is today considered one of the most stable and prospering countries in Central and Eastern Europe (CEE). It has accomplished a profound transition towards a market-driven economy including privatization and restructuring of all its industry and service sectors. Only a handful of companies remain in state ownership, including several utilities, national airlines, post, and a few others. The country has attracted impressive volumes of foreign direct investments and its attractive capital of Prague has been the most popular destination for millions of tourists every year.

The Czech Republic enjoyed several years of continued economic growth up to the financial crisis when the demand for Czech goods plummeted. As a small, open, export-driven economy, the country’s performance is sensitive to changes in the economic performance of its main export markets, especially Germany, and is severely affected when Western Europe falls into recession.

The Czech economy has shown solid growth in recent years, supported by strong domestic demand, rising tax revenues and exports. The economy even grew above the initial expectations of the IMF. However, the country’s economy has been significantly affected by the Covid pandemic with total output falling by 5.8% in 2020. The prevailing manufacturing and automotive sectors in the domestic economy had to deal with the international supply bottlenecks. The recovery has been slow and the Czech Republic, along with Slovakia, has been at the tail end of the EU countries in terms of GDP growth. The energy price spikes and soaring inflation have further worsened the economic outlook. The country is highly dependent on Russian oil and gas which makes its economic position more vulnerable.

The agricultural sector went through a serious crisis in the 1990s and remains highly subsidised. It accounts for 2% of the country’s GDP and employs 2.75% of the labour force. The main agricultural products are sugar beet, potatoes, wheat, barley and poultry.

The Czech Republic is the second most industrialized country in the EU after Ireland; industrial production accounts for almost 40% of its GDP. Apart from traditional sectors such as automotive production, iron and steel production, metalworking, chemical production, engineering, food industry, and production of textiles and glass, the country has recorded a boom in high value-added segments, such as biotechnologies and life sciences, precision engineering, nanotechnologies, and specialized information technologies and software. Services remain the top contributor to the economy generating approximately 60% of GDP.

The automotive industry, including the manufacture of components, is a crucial part of the Czech economy accounting for 26% of the manufacturing output and 23% of total exports. It employs more than 180,000 workers. The Czech Republic ranks number two globally in passenger car production per capita, number three in the EU vehicle production, and number ten in vehicle production globally. The industry includes close to 200 component suppliers, most of which are foreign-owned – via acquisitions and green-field & brown-field investments. Automobile-related manufacturing, design and R&D are one of the densest in the world with half of the world’s top 50 components producers present in the Czech Republic. Besides its traditional carmaker Skoda (part of VW), the Czech Republic also hosts plants of Toyota and Hyundai, together producing about 1 million cars per year.

Another sector with a long tradition, currently ranging from the manufacture of components to consumer electronics or avionic radars. The sector is marked by a high proportion of imported materials, components and parts for production and assembly, and a wide range of technological processes. Over 15,000 companies employ nearly 150,000 workers with various skills. Every third electron microscope in the world is produced in the Czech Republic.

Tightly connected to the automotive and electronics sectors, and as such benefited from their boom in the last few years. The plastics and rubber industry belongs among the most significant manufacturing sectors generating approximately 6.5% of total industrial output.

Another sector in which the Czech Republic has an excellent reputation with many leading international firms undertaking R&D and engineering product development through local subsidiaries. Major investors include ABB, Parker Hannifin, Ingersoll Rand and Honeywell. FDi Benchmark marked the quality of Czech scientific research institutions as the highest within the CEE region and is equal to that of many western countries. It is the third-largest manufacturing sector in the country, employing over 126,000 people.

The Czech Republic boasts one of the most developed biotechnology sectors among new EU members with more than 500 entrepreneurial entities. The development of human and veterinary pharmaceuticals, diagnostics, fermentation technologies, and use of biotechnology in waste handling and environment protection are segments in which Czech biotech entities have been successful. The Czech government set development of new pharmaceutical treatments and diagnostics as one of the top priority areas and allocated public funding of over EUR 2.5 billion in the last decade to strengthen the sector’s research infrastructure.

The country has been widely recognized by multinational corporations as a primary location for regional expansion as well as for setting up their regional headquarters and has the second largest business support market in the CEE, hosting over 200 shared service centres including Accenture, ExxonMobil, Honeywell, Monster Group, Siemens, SAP, Anheuser-Busch Inbev, Johnson Controls, Covidien and many other.

The Czech Republic is considered one of the most favourite destinations for tourists due to its historical heritage, spas and resorts as well as natural sights. Twelve historical monuments are on the UNESCO heritage list. There are over 200 castles and chateaus, more than 40 protected historical towns, and 36 spa towns. Its capital Prague is the country’s main attraction. The total contribution of travel and tourism contribution reaches 7.8% of total GDP (app. 10% contribution to employment).

The Czech Republic is exceptionally open to international trade – its export/GDP ratio at 72.6% (2021) is one of the highest in Europe, with imports comparably high at more than EUR 180 billion per year. About 80% of Czech exports go to other EU member states which places the country at the top of the EU ranking.

Market Research in the Czech Republic

International Trade Consultancy – Export, Marketing and Trade Promotion in the Czech Republic and the CEE region