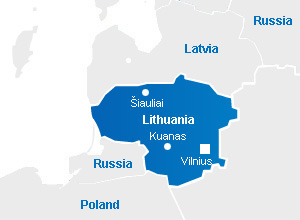 The largest of the three Baltic republics of the former Soviet Union
The biggest economy among the Baltic states, generating roughly half of this region’s GDP
Most diversified industry in the Baltics

Lithuania is an open, dynamic and fast developing country, at the geographical centre of Europe. It is an ideal location for logistics, given its position at the crossroads of western and central Europe, Nordic & Baltic region, and Russia and the CIS.

As a member of the EU since 2004, the country has experienced significant growth coupled with the rapid modernisation of its economy. Lithuania was deeply affected by the financial crisis yet it has since experienced the fastest recovery in Europe, partly fuelled by a well-performing banking system and a diversified industrial sector. The GDP growth has been relatively strong over the past several years, mainly thanks to strong industrial production, construction, wholesale and retail trade. The Covid pandemic had only a milder negative impact on the economy, as the national output decreased by only 0.1%. The growth of 5% has been resumed in 2021. Lithuania’s ongoing recovery hinges on improving the business environment, especially by liberalizing labour laws, and improving competitiveness and export growth. In addition, a steady outflow of young and highly educated people is causing a shortage of skilled labour, which, combined with a rapidly aging population, could stress the public finance and constrain long-term growth. The country is also facing unprecedented economic and political boycott from China after it allowed Taiwan to open an official office in the country.

Source: Department of Statistics to the Government of the Republic of Lithuania, IMF, Eurostat, World Bank 2015-2021

Manufacturing, construction, transportation, financial intermediation, and real estate ranked among the fastest growing sectors in the economy of Lithuania. Structurally, there is a gradual but consistent shift towards a knowledge-based economy with special emphasis on biotechnology (industrial and diagnostic). The major biotechnology companies and laser manufacturers (Ekspla, Šviesos Konversija) of the Baltics are concentrated in Lithuania. Also, mechatronics and information technology (IT) are seen as prospective knowledge-based economy directions.

As Lithuania is the only Baltic state with a nuclear power plant, the country has developed an important energy industry. It has also become an important hub for the transport of oil from the east to Western Europe due to its strategic location on the Baltic coast. Furthermore, the country has become a transit route for natural gas and the country’s energy infrastructure is currently being linked up with the other countries of Central and Eastern Europe.

Main export products include dairy products, fish, meat and preparations made of cereals, flour, starch or milk. Half of the dairy products are sold abroad and exported to Germany, Poland, Latvia, Italy, or the UK. Agricultural and food products account for 18.4% of total exports. The sector benefits from an attractive quality/price ratio, the ability to produce in small batches, or its strategic location.

Lithuania has established itself as a global leader in the laser technology industry with 80% of the world’s market share for high-energy pico-second lasers, and it is also the world leader in terms of ultra-fast parametric light generator production. The laser technology industry has been helped by investment in research and development and there are currently 11 science, research and development centres dedicated to research in this specific industry.

The service industry as a whole accounts for 61% of Lithuania’s GDP. Major companies have relocated many of their services operations to Lithuania including Barclays, CSC, SEB, Transcom, Unicall and Storebrand. In recent years Lithuania’s economy has undergone transition to become a knowledge-based and multilingual labour force. According to government statistics, 90% of Lithuanians speak a second language and 30% of the population are university-educated.

With its small-scale economy, Lithuania is heavily involved in international trade which makes it sensitive to external factors. Its GDP/export ratio amounts to 80.4%. Its main import and export partner is Russia, the country exports to the EU countries only 57.7% of goods and services.